The new “Untergrund” album is packed with songs in both the German and English languages and offers a boiling cocktail of frontal minimal EBM, muscled melodic hooks, strong carrying vocals and a gritty touch of power. Reminiscent of RAMMSTEIN in the force of their powerful German vocals, ARMAGEDDON DILDOS have musically been declared the German counterpart to FRONT 242. With his new album, Uwe Kanka proves to us once again that less can be much more, and that he has that impressive talent to mix upbeat sequences, with dark synths while perfectly balancing them with catchy sing-along melodies, choruses and dynamic guitar intrusions.

After the astounding return of LEAETHER STRIP also on Alfa Matrix, this is another big and promising return… Come! ARMAGEDDON Come! Kick us in the face! Knock us out with one punch!!

This limited 2CD carton box comes with 14 exclusive remixes and a special collaboration together with Myk Jung (FAIR SEX). Behind the remixing desks we will notice amongst others PLASTIC NOISE EXPERIENCE, DIGITAL FACTOR, DARKMEN, AUTODAFEH, MUMMY HURT MY HEAD, INERTIA, etc. 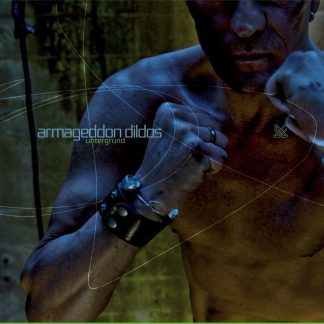