This Autumn 2015, the masters of evil ALIEN VAMPIRES make their devastating comeback to Earth with the full length album “Drag You To Hell” whose title gives on itself the tone and taste of the full program!

In between their successful tours across the globe and many festival shows, Nysrok and Nightstalker spent the last couple of years at The Old Truman Brewery studio in Brick Lane (Shoreditch) London (UK), conceiving what will soon be referred to as ALIEN VAMPIRES’ absolute work reference and unattainable masterpiece which eventually got the mastering treatment by Jan L (X-Music Production). To reach that all-new sound-maturity level, the duo managed a true tour de force by gathering an impressive selection of special guests who each uniquely contribute to making this new album a cult milestone in the band’s discography: the evil twins of the industrial/metal scene indeed worked in studio this time with legendary artists like Attila Csihar (charismatic vocalist of cult black metal act MAYHEM and SUN 0))) ), the two-time Grammy nominated Sin Quirin (guitar player for the unmatched MINISTRY gang), Nero Bellum (vocalist of US aggrotech band PSYCLON NINE) and last but not least, guitarist Charles Edward (MAYHEM).

“Drag You To Hell” is ALIEN VAMPIRES’ new 15-track evil manifesto. A relentless collection of powerful sonic assaults revealing a band at the top of its unconditional ascension and who keeps on making no single compromise in its revolted punchy “hate” attitude and its venomous provocative form of art. If the opening noir and mystic track “The Divinity Of Solitude” definitely sets the overall atmosphere of the album with the intense hateful voice of Attila Csihar (MAYHEM & SUNN O))) ), the very catchy “She Owns The Nite [Lilith]” sets the perfect balance between ALIEN VAMPIRES’ characteristic upbeat industrial sound and its harsh elektro sequences and the muscled dark metal guitars which come and reinforce their sound. And the other new club hit “You Wish Me Dead Get In Line” will not contradict this assertion, with a powerful chorus you’ll quickly sing along while dancing to this ultimate industrial grunge groove! And this new album definitely counts many more full-frontal assault dancefloor tracks that will all make the faithful and ever-growing ALIEN VAMPIRES fan-community members run berserk on the Underground burning dancefloors. Think for example of the hammering “All The Fakes Must Die”, the darkish technoid “Lock It” or yet the exploding hi-energy industrial-rave “Touch” and its addictive sonic lobotomy effect…

What is amazing on this new album is how ALIEN VAMPIRES have managed to make this collection sound very homogeneous although some songs get backed-up by incisive guitar parts adding flesh to the compositions, reinforcing at times the melodic parts or simply giving the rhythm to the song, but also on others fully supporting the industrial rage making the wall of noise full and complete: for eg. on the title-song “Drag You To Hell”, and also on the amazing industrial metal “Psycho Bitch” on which for the first time in music history we see MINISTRY’s guitarist (Sin Quirin) in a duet with MAYHEM’s guitar player (Charles Edward)!

Other soul-catcher tracks worth the mention here include the lingering “Undivided Wholeness” featuring the bewitched vocals by special guest Nero Bellum of PSYCLON NINE, the sensational “No Return From Where I Am Going” on which we discover Charles Edward (MAYHEW) reinterpreting black metal in an industrial key offering a full domination spectrum to Nysrok’s poisonous distorted power-shouts or yet the pumping endzeit hellektro “Unidentified” which is bound to become a club classic.

The album is also available in a deluxe 2CD carton box limited edition with some special ALIEN VAMPIRES fan-goodies and the exclusive bonus disc featuring nothing less than 16 bonus cuts including alternative versions of album songs and a few remixes, plus 6 versions of the non-album track “All The Fakes Must Die” and the final tortured exclusive track “I Love Death More Than Life”. Selected remixers count among others acts like XOTOX, C-LEKKTOR, AVARICE IN AUDIO, ISZOLOSCOPE, SPEED INJEKTION and many more. 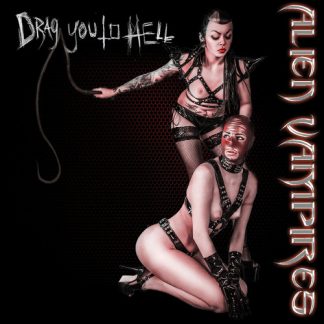