Always favoring quality to quantity, AIBOFORCEN has never been one of the most productive bands from the Belgian electro scene. It took them this time some 7 (!!) magic years to find their way through the somber labyrinth of their 5th album entitled “Dédale”.

Faithful to the band’s sound trademark, “Dédale” offers a complex and modern mixture of eclectic electronic styles ranging from harsh elektro to catchy synth body music through dark trip hop with a certain future pop touch and that characteristic combination of harsh male growls and sensual female vocals which made their name. From the vicious upbeat “Everything Gets Sacrifice” to the moody abd lingering “Poem Of Life” through the beautifully dark and aptly titled “Shadows”, AIBOFORCEN once again proves its unique ability to blend complex song structures, efficient melodies and vocal lines, random hitting beats and poignant atmospheres. An addictive mid-tempo release far away from the beaten tracks which grows on you until you totally fall under its spell. A mind-boggling journey through a labyrinth of electronic songs with enough experimental moments and challenging arrangements to surprise you at every corner, including a totally unexpected cover version of U2’s “New Year’s Day” with the amazing AYRIA on lead vocals!!

The limited carton box edition of the album also includes the 14-track CD “Sanctuaire” featuring some 5 exclusive songs: “Sanctuaire”, “What’s a Fetiche Darling”, the harsh and tormented “Blood In Your Face” (with ACYLUM on vocals), the body punk assaults of “Running With The Wrong Boys” with the angry Claus Larsen on vox and the viral electro “Wrapped In Plastic” (featuring IMPLANT). Add to this 8 radical and brilliantly selected remixes of album songs by ESSENCE OF MIND, ACRETONGUE, THE SYNTHETIC DREAM FOUNDATION, PSY’AVIAH, REGENERATOR, KANT KINO, CELLULOIDE and BEATI MORTUI. Cherry on the cake, AIBOFIORCEN also deliver 2 astounding revamped versions of their club hits “Twilight World” and “Not Unique”.

The first 50 fans ordering this box from the www.alfa-matrix.com e-shop can also get the super limited bonus 3″ CD single CD 3 “L’Errance” featuring 4 additional exclusive remixes in a special packaging.

Be the first to review “Aiboforcen – Dédale 2CD” Cancel reply 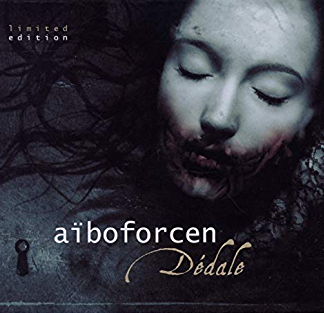