The ACYLUM gang strikes back and signs in with “Karzinom” its hardest and most uncompromising album to date. With a hardcore “fight-club” attitude, East-German sound terrorist Pedro Engel sets to attack the dark elektro scene with solid harsh beats, crunching distortion, sinister cinematic atmospheres, massive orchestral arrangements and intense harsh vocals, with the whole collection hammered by ACYLUM’s now so “(un)popular” highly provocative lyrics. ACYLUM hits straight in your face without any warning and offers you “the” real fight sensation on smashing songs like “Shoot em up”, “Question” or yet “Deutsch”.

Others will also favour the darker “anti-club” side of the band on mid-tempo multi-layered tracks like “Haus am See” or “Freeze” mixing lingering dark noise, dramatic heavy electronics and creepy melodic moments, the whole tempered by the contrasting bewitching female backing vocals of Nadine Cooraz Engel (HAUSHETAERE). All in all, ACYLUM remains faithful to his uncompromising concept on this “Karzinom” relentless assault bringing its attack set to the next upper force level.

The bonus disc of this limited carton box edition of “Karzinom” holds a remastered version of his self-released and long time deleted first album “Your Pain V.2.0” reminding us of how hard and strong the ACYLUM war-machine sounded in its early days. Old school dark elektro “made in 2005” at its best and setting the first steps of ACYLUM’s ascending power sound. Fans will also notice the additions of several unreleased bonus demo tracks and mixes…

Be the first to review “Acylum – Karzinom 2CD” Cancel reply 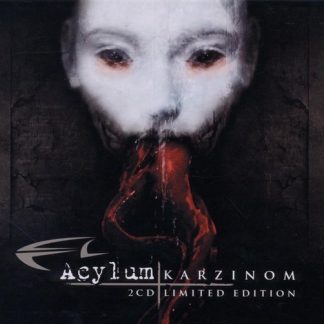