The True Union – Love Me Now (Not) EP

Are you ready for some female fronted powerful industrial metal with a creepy pop/EDM twist? Here comes a hell of a debut EP that is almost a mini-album as such!

Just like they did it in the past for bands like ZOMBIE GIRL, UNTER NULL, HELALYN FLOWERS, I:SCINTILLA, LOVELORN DOLLS or yet AYRIA, the Belgian label Alfa Matrix confirms once more their ability scouting talented artists on the underground/indie scene!

Lead by the charismatic multi-talented artist Azul Far, THE TRUE UNION offers a unique blend of electro/techno music intensified by drop-tuned guitars and growling female vocals. After several releases since 2009 under the “THE UNION” moniker, the American (Denver-Colorado) aggro-tech act has now signed to Alfa Matrix for the release of their new “Love Me Now (Not)” EP (and stunning video clip) and becomes for the occasion “THE TRUE UNION”.

Like the title song of this 9-track EP nicely reflects it, THE TRUE UNION is all about contrasts, distilling Hell’s burning fires and Heaven’s lustful softness to create an own sonic universe made of colliding opposites. Offering us a kind of jamming session between KMFDM, SWITCHBLADE SYMPHONY and COMBICHRIST! This dilemma song, mixed & co-produced by no-one else but Travis Bacon, has an industrial metal vibe through its heavy and rhythmical guitars, but also reveals a seducing punchy upbeat aggrotech style with amazing and highly diversified female vocals varying from clean singing to overdrive powerful screaming.

“Blinded” is another quite characteristic track showcasing Azul in her multifaceted roles hovering between demon and angel, jumping from slow seductive hypnotizing moments to suffocating frontal tormented assaults. And to underline that dichotomy, THE TRUE UNION even dared recording the song with two different studio producers and reach amazing opposite but also complementary versions from German metal producer Siggi Bemm and electro industrial guru Sebastian Kormor.

And that’s not all folks, to welcome THE TRUE UNION to the Alfa Matrix label family, label mates in the likes of ALIEN VAMPIRES, AESTHETISCHE and ACYLUM all joined hands with Azul and delivered a tour de force of remixes that come and reinforce that powerful EP release. 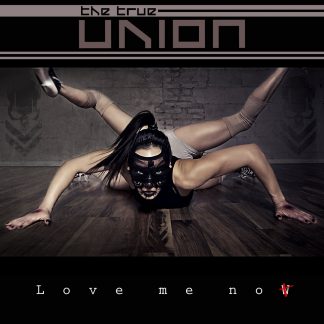 You're viewing: The True Union – Love Me Now (Not) EP €6,00
Add to cart
Manage Cookie Consent
We use cookies to optimize our website and our service.
Manage options Manage services Manage vendors Read more about these purposes
Preferences
{title} {title} {title}