Highlighting the band’s trademark sound merging cold melancholic atmospheres and poignant sorrowful melodies with harsh aggressive vocals and powerful dark elektro assaults, “In Colors of Void” features some 11 songs dealing with mortality and tragic death and how are we facing grief and such sudden loss… “It is all about chaos theory, choices, and causality – and also about psychic vampirism…”, says Aleksi Martikainen. “In songs like “Shutter” and ”Devoid Of Coloration”, I write about the sudden decay of mind after manipulation and also about the total death of self-consciousness…”.

If you like fierce electro beats, cold northern synth atmospheres, distorted angry vocals and hi-energy aggrotech/EBM, then this intense introspective sonic journey offered to us by Aleksi Martikainen (vocals) and Kimmo Huhtala (synths) comes highly recommended especially if you are fan of bands in the likes of GRENDEL, SUICIDE COMMANDO, ASLAN FACTION, ALIEN VAMPIRES or yet early SKINNY PUPPY. 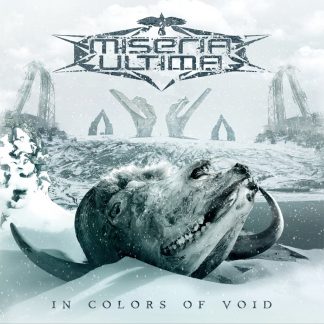